Australia’s relationship with the queen is fascinating!  Australia is a constitutional monarchy, which means they operate under the rules and regulations of a constitutional government, much like what I am used to in the USA, but they recognize the Queen as the Head of State.  The Queen is not involved in day-to-day affairs of the Australian Government, but rather plays a symbolic role.  When she visits Australia, she is speaks and acts as the Queen of Australia, not the Queen of the United Kingdom, but she actually has no power or authority here.  Like I said, Australia has a fascinating relationship with the Queen!  The best part as an expat living in Australia is that we get a day off to celebrate the Queen’s Birthday, which is not on the Queen’s actual birthday.  Never mind, I’ll take a day off anytime for any reason!

We’d talked about going somewhere for the Queen’s Birthday – Brisbane, Cairns, Port Douglas, somewhere.  The month leading into the Queen’s birthday was pure chaos at work and we never got around to booking anything, so a few days before the long weekend Schall suggested a road trip to Adelaide.  It is, after all, only an 8 hour drive and we figured there is a lot of country to be seen in 8 hours of driving.

Saturday morning, we dropped the pups off at the Port Melbourne Pet Hotel and headed for Geelong to pick up Schall.  There is really only one road between Melbourne and Adelaide, unless we were to take the Great Ocean Road.  The drive is about as interesting as driving across Iowa and Nebraska.

Sometimes as I admire an orange sunset over a desolate landscape, I think to myself, “this is what I imagine Africa looks like.”  Someday, I hope to see it in person, but for now I get to enjoy these periodically.

Saturday night we arrived in Adelaide in time for dinner and drinks!  We tried a pizza place, but the pizza oven was out of order, so we moved on to Thai food.  Following dinner we found a Belgian Bier Garden and partook.

Sunday morning after breakfast, we headed off on a walking tour of Adelaide.  Did you know they call Adelaide the City of Churches?  As we walked about, we noticed the churches everywhere; within 2 blocks of our hotel there were probably 6.  They were all gorgeous 18th & 19th century English architecture. 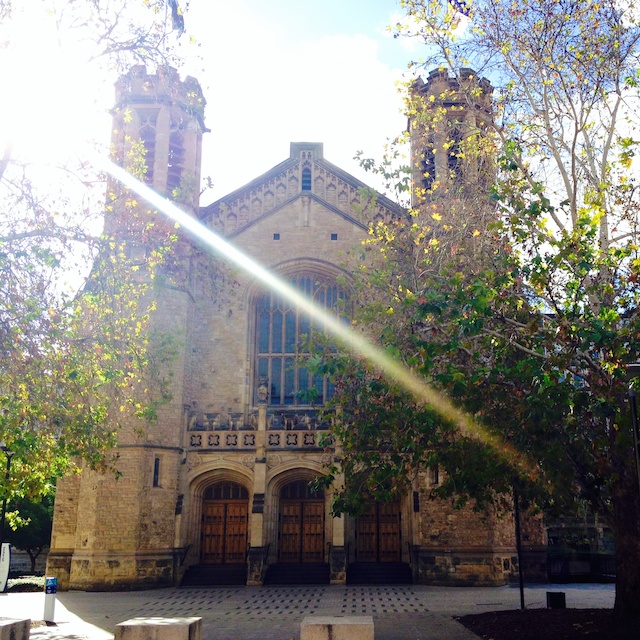 In fact, much of the architecture was gorgeous 18th & 19th century. 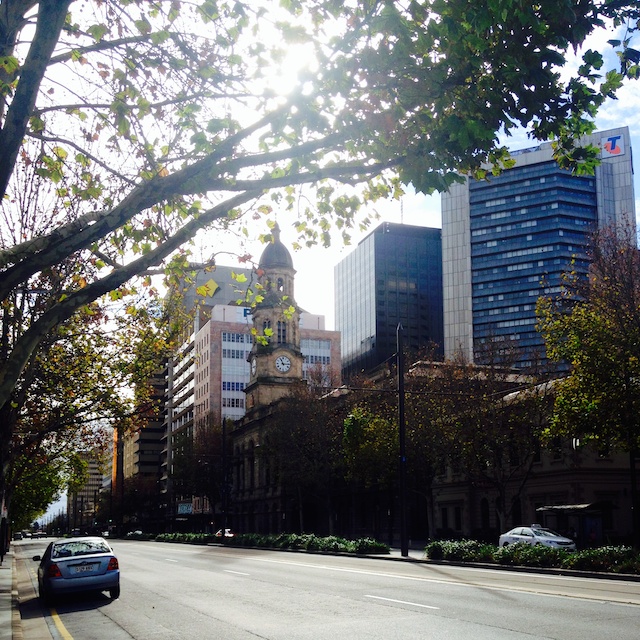 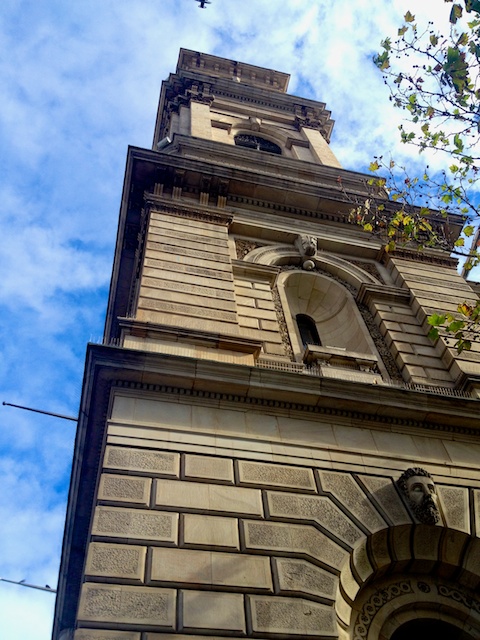 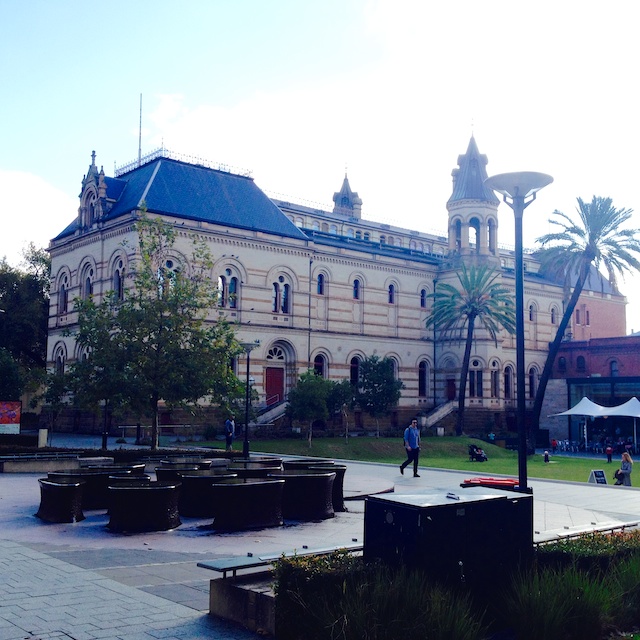 Not too long after breakfast, we came across “of” just hanging out on a street corner. 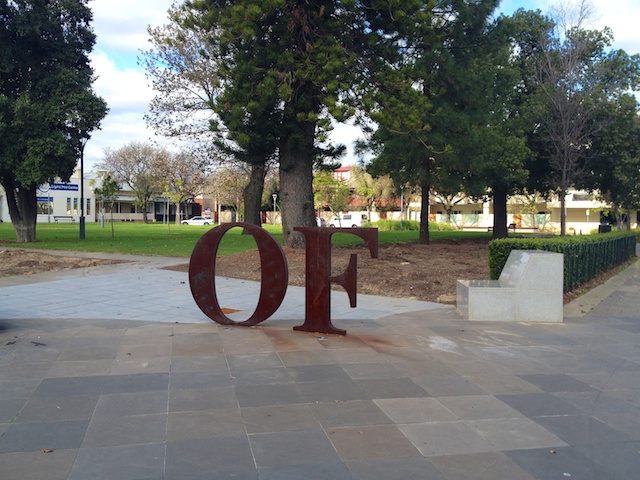 “Of” what, you might ask?  Well, any way I did.  As we stood at the street corner waiting for the light to change discussing “of” what, we saw that each of the other corners also had words.  “The forest of dreams.” The next stop began our exploration of Coopers beers, as we came across the Coopers Ale House and stopped in.  These first two that we tried, Coopers Vintage and Coopers Sparkling Ale, were the best of the Coopers Beers we drank in Adelaide.  As we sat there drinking these chatting with the bartender about Coopers being an Adelaide made beer, I researched whether or not we could take the brewery tour.  Unfortunately it is only offered Tuesday – Friday.  Next time…. After our first taste of Coopers Ale, we continued along our walking tour of Adelaide and came across the National War Memorial, commemorating those who served in World War I. As we headed over to the crosses that surrounded the memorial, we nearly missed that there was an inside to it, which was a list of names and what the people did.  Schall and I may have geeked out a little. 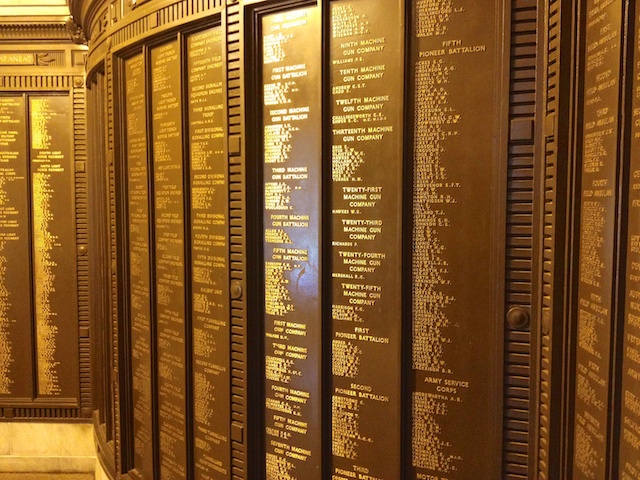 After exiting, we took the exterior tour of the memorial.  There were 6 different crosses surrounding the memorial, with a shrine to World War II in the center. 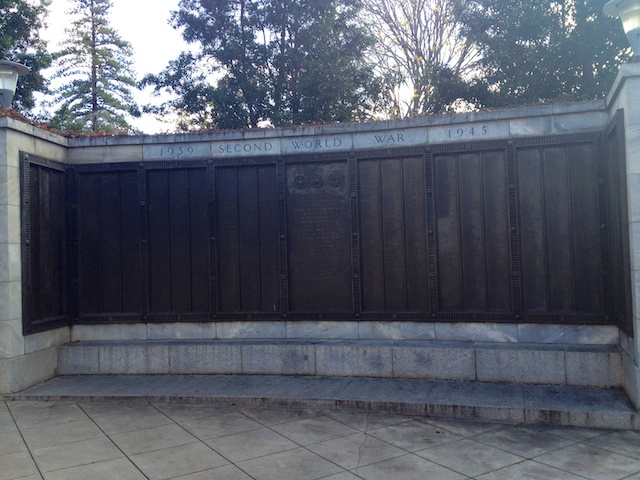 Continuing down the street, we thought we were walking a long a large park. But then things started to get serious when we noticed 18th century style barbed wire.  (Yes, it is glass that is a part of the wall.) As we rounded the corner to head into the park, we realized that we’d stumbled upon the Government House.  We laughed pretty hard when we realized that one of the animals on the South Australia State Crest is a Unicorn. From here, we realized we were near the river walk and decided to check it out.  Along the way we came across the cabaret festival, and stopped for our second round of Coopers Ales: Coopers Celebration Ale and Coopers Artisan Reserve Ale.  My review is that the Sparkling and Vintage are better than Celebration and Artisan Reserve.  I wasn’t sure the festival was actually happening, because it was so dead, but apparently there were shows going on. On to the river, which was very pretty and had a long windy bridge, interesting artwork, mean black swans and a great view of the stadium and the city.

From the River Torrens, we could see this shiny building and decided that we wanted to see it closer.  It was a bit of a challenge to get back across the river and all the way to this building, but eventually we did figure it out.  Along the way we came across a skate park with an announcer and children skateboarding.   We never did figure out what this building was, but did spend some time admiring it.  After about 10 minutes of google research this morning, I’ve discovered that it is the South Australian Health & Medical Research Institute (SAHMRI) and they are hoping to inspire architects with this building. 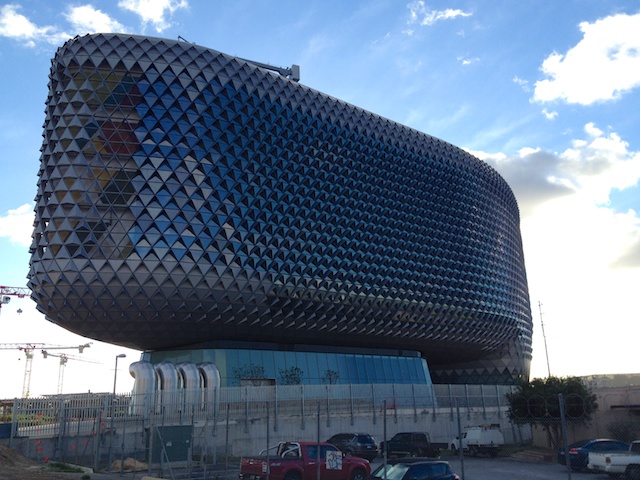 As we started the final leg of our walking tour of Adelaide, there were some interesting pieces of art and graffiti, but not much else.

Monday morning, we headed toward Port Adelaide, because I really wanted to see the dolphins that are supposed to live in the river near the coast.  Despite our best efforts (eating lunch in a freezing cafe along the wharf, driving the dolphin trail) we did not see the dolphins.  We did however, climb to the top of the lighthouse.  It was a very tight squeeze for the boys.

Apparently, the coastline along Adelaide is pretty treacherous and many ships have wrecked, so they’ve build a Shipwreck Memorial on the wharf. I also admired this Windjammer for quite a while as we walked down the wharf toward it. That was all the time we had for Port Adelaide, as we were very aware of our 8 hour return trip to Geelong and Melbourne.  We did, however, want to stop in Hahndorf on our way back, so we headed in that direction and I had a nice 50 minute nap.

When we were arriving in Hahndorf, we were certain that there must be a festival or something.  Traffic was backed up and there was no parking, but it turned out that people just really like Hahndorf on holiday weekends.  All we had time for was a quick walk down the main street and some German Beer, but it was enough to make me think that it would be a great place to spend a winter weekend wrapped up in a blanket in front of a fire.  (I also bought some German chocolate while we were there, duh.)

That was it – we headed for home after this, because it was 3:00pm and we had an 8 hour drive back.

I’d like to thank Australia for recognizing the Monarchy.  I’d like to thank the Queen for having a birthday on some other date, but allowing Australia to celebrate it in June.  I’m very appreciative of the long weekend.  Happy Birthday to the Queen!